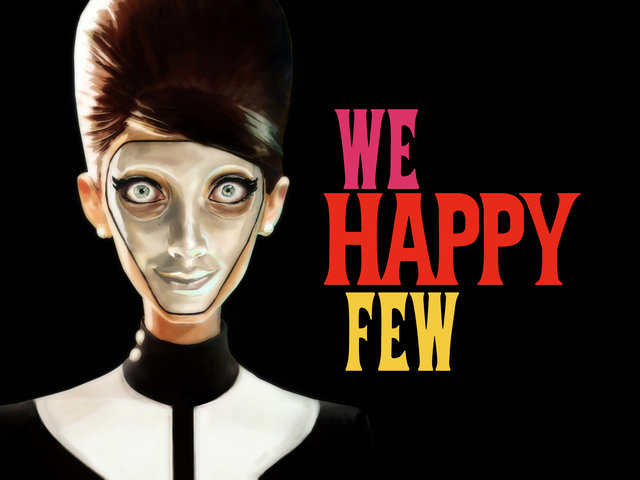 As we said above, we started prototyping We Happy Few in January 2014. We grew our team from 7 to 13 with two full time team members working remotely, with everyone started on the project by March this year. The game we have right now is a really great base. So, we’re here on Kickstarter for two reasons: 1) We want to know whether you dig this game as much as we do. If you do, and you contribute towards this game, then we can make it bigger and better than we could do on our own. As the game is completely systemic, additional development money just means more, better quality content to play through. 2) We believe that this game will be made better by open development, and by securing additional funding early. By getting lots of engaged people involved at an early stage, it helps make sure we do things right. Last updated: Thu, Jun 4 2015 12:30 pm EDT

Which platforms will We Happy Few release for?

We’ll launch on PC first, on Windows. See below for Linux and Mac. We plan to come to consoles after launch, but we want to focus on the PC version for now. We’re likely to launch first on Early Access, on Steam. However, the more successful this campaign is, the longer we’ll be able to continue working with our pre-alpha players, and potentially not launch on Early Access at all. Last updated: Tue, Jun 30 2015 7:17 pm EDT

When will it release?

When can I learn more about the narrative?

Not for a while: we will not be revealing anything more about the narrative until the full launch of the game. We can promise meaty, nuanced, dark, morally ambiguous stories of the kind you rarely see in video games. We also have a plan to do something clever with the interweaving stories that we’ve never seen done in a video game. But it’s all secret for now. Last updated: Thu, Jun 4 2015 12:30 pm EDT

CA$250k buys us 2-3 more months of community-focused development. If we hit stretch goals, we can keep going, expand the scope of the game, and deliver more We Happy Few goodness. Honestly, we’d ask for more, but don’t want to seem greedy. But, at the same time, you get what you pay for, you know. We can promise that 100% of the funds of this Kickstarter (except for any taxes/fees) will go towards development of the game. Last updated: Wed, Jun 17 2015 1:54 pm EDT

It means access to the current version of the game, plus monthly updates, via a Steam key, after the Kickstarter campaign is funded. How soon after depends solely on us finalising the way we’re delivering keys. It does not mean access to narrative content. To make sure that we’ve got a surprise left for launch, and people interested in the story don’t lose out, we’re developing the story behind the scenes, and will release it on full launch of the game (i.e., post Early Access, if we go down that route). Last updated: Thu, Jun 4 2015 12:30 pm EDT

Will you implement every request the community makes?

No - while we’ll be listening to everyone’s feedback, we won’t get carried away. We’ll always make sure that our changes remain faithful to our vision for the game. If you say “I want dinosaurs”, sorry, but that won’t happen. However, if you say “guys, I’m throwing my mouse out the window because you’ve nerfed the cricket bat, and I really liked it, you bastards,” then we’ll see what we can do :) And if you say, “I really want to be able to throw a body out a window to make a distraction,” well, a couple of people did say that, and we have already done it. You can now throw bodies off or at anything you want, and yes, the Wellies tend not to like that. Hurray. You sick bastards. Last updated: Thu, Jun 4 2015 12:30 pm EDT

We are very excited to announce that we will be bringing We Happy Few to Mac and Linux! Now the citizens of Wellington Wells will be able to be suspicious of fruit and aquatic mammals as well. This took a bit of time for us to consider, so thank you for being patient. We hope that you guys will help us spread the word to your friends in Mac and Linux gaming communities, as we’d love to have them join us! Last updated: Tue, Jun 30 2015 7:10 pm EDT

Will we get Mac or Linux versions in the pre-alpha?

No. As you guys know, we’re not a huge team, and we really want to focus on making this game the best it can be. We are planning to deliver the Mac and Linux versions on or shortly after full release of the game. We will not be creating Mac or Linux pre-alpha versions - the pre-alpha through Steam will be Windows only. If we go into Early Access at some point, we won’t be creating them then either. Last updated: Tue, Jun 30 2015 7:10 pm EDT

What tier do I pledge at for a Mac or Linux version?

How will we get access to the Linux or Mac versions?

The same way you get access to the Windows versions: through Steam and DRM free. Exactly how we distribute the DRM free builds we haven’t confirmed yet (you do have to get retailers to agree to this), but hopefully it will be GOG. Last updated: Tue, Jun 30 2015 7:10 pm EDT

We would like to run the pre-alpha on Wine or Parallels, or through Virtual Machines.

Cool! While we’re not going to spend a great deal of time supporting this, let us know how it goes on our forums and we’ll be happy to sticky a thread to help keep support/solutions in one place. Last updated: Tue, Jun 30 2015 7:10 pm EDT

How long/hard is the game?

Good question! This is a roguelike, so the game is based on the concept of replayability - you don’t only play this game through once. It is a challenge, and you need to learn the rules to try and beat the game before time runs out. Chances are, you’ll probably die within 5 minutes the first time. But, the next time you’ll last 15. And then 30. And so on, until you can escape before time runs out. Each run through should be a maximum of around 3 hours to complete (this isn’t Don’t Starve, so it doesn’t continue indefinitely). Although, that may change if (a) you die, or (b) you find a way to speed it up. However, for the people among us who don’t like we will also have different difficulty settings, to allow people to experience the story without wanting to pull their hair out. Last updated: Thu, Jun 4 2015 12:30 pm EDT

What are the specs to play the game

It is too early to have very specific specs. As development progresses, those specs will go up and down. Please bear in mind that those are temporary specs :) Processor: Quad-core Intel or AMD, 2.5 GHz or faster Memory: 8 GB RAM Video Card: NVIDIA GeForce 470 GTX or AMD Radeon 6870 HD series or higher Last updated: Wed, Jun 17 2015 1:54 pm EDT

BackerKit is a service that crowdfunded project creators use to keep track of hundreds to tens of thousands of backers—from shipping details, pledge levels, preferences and quantities, whether they have paid or had their card declined, special notes, and everything in between!

The BackerKit software and support team is independent from the campaign’s project team—BackerKit does not handle the actual reward shipping. For more information about the preparation or delivery status of your rewards, please check the project's updates page.

How does BackerKit work?

After the campaign ends, the project creator will send you an email with a unique link to your survey. You can check out a walkthrough of the process here.

I never received my invitation. How do I complete the survey?

The most common reasons for not receiving a survey email is that you may be checking an email inbox different from the email address you used to sign up with Kickstarter, Indiegogo or Tilt Pro account, or it may be caught in your spam filter.

Confirm that the email address you are searching matches the email address tied to your Kickstarter, Indiegogo, or Tilt Pro account. If that doesn’t work, then try checking your spam, junk or promotions folders. You can also search for "backerkit” in your inbox.

To resend the survey to yourself, visit the project page and input the email address associated with your Kickstarter, Indiegogo or Tilt Pro account.

How do I update my shipping address?

When will my order be shipped, charged or locked?

That is handled directly by the project creator. BackerKit functions independently of the project itself, so we do not have control of their physical shipping timeline. If you want to check on the project’s status, we recommend reading over the project's updates page.

I completed the survey, but haven't received my rewards yet. When will they arrive?

As BackerKit does not actually handle any rewards or shipping, the best way to stay updated on the shipping timeline would be to check out the project's updates page.